We have a Wedding Surprise

We are excited to bring you on a series of journeys showcasing love and how it inspires our sense of wonder. Our special insight this month focuses on an incredible love story and will be the first in our series entitled Magnificent Manor Houses. This month’s setting is the beautiful Ballymagarvey Village in Meath and what a Magnificent Manor house to have a wedding and spectacular location for this love story to shine, where one of our wedding celebrants Miriam Fitzgerald performed the wedding ceremony.

Welcome to the wedding of Patrick and Mainard 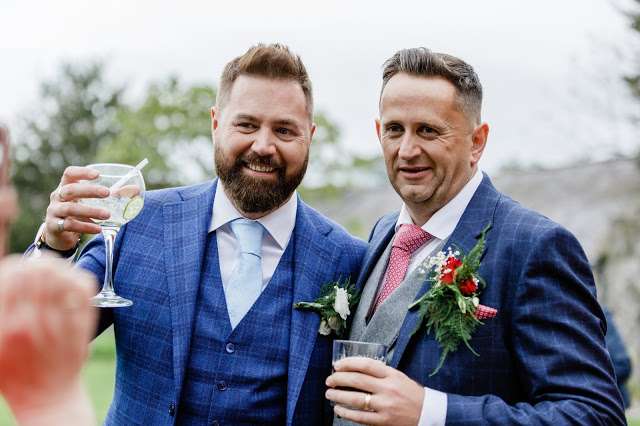 Patrick and Mainard have been together since 2002. Their love story is anything but conventional, yet beautifully arced between Kerry and Dublin. Initially they met online via a dating website but arranged to meet in person under the clock at Easons on O’Connell street, Dublin. 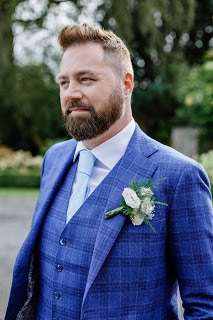 Patrick confesses he is a stickler for punctuality however he decided to go to a party with some friends the night before their arranged first date. He confesses he was still hung over when they met the following day, brutally hungover in fact and so was very uncharacteristically late (or so he says).

The date culminated with Mainard attending an eye specialist in the Mater and Pat stayed with him the entire time. Mainard recalls “ I remember thinking that this was such an incredibly sweet thing to do, a perfect stranger gave up his Saturday and sat with me for hours, so I said I wanted to cook him dinner as a proper thank you for staying with me. The rest is history! 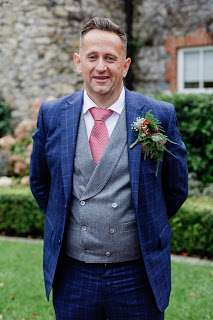 Pat recalls “I knew there was something special about Mainard, something I couldn’t articulate that kept drawing me back and (despite his lack of punctuality which really irritates me) I just wanted to be around him, I just knew he was the one.” In 2008, a self described traditionalist Pat proposed, after planning a surprise holiday in Nice in France. As the sun was setting, he got down on one knee on the boulevard and popped the question. Thankfully Mainard said Yes!

Pat describes himself as impulsive and Mainard as the practical one in the relationship. Despite Pat wanting to get married immediately either in the USA or elsewhere Mainard suggested securing their jobs, was the first priority after which was getting a house together and marriage would follow. They purchased their first home in January 2015. The wedding date was set after the marriage referendum, but no location was decided upon as yet. 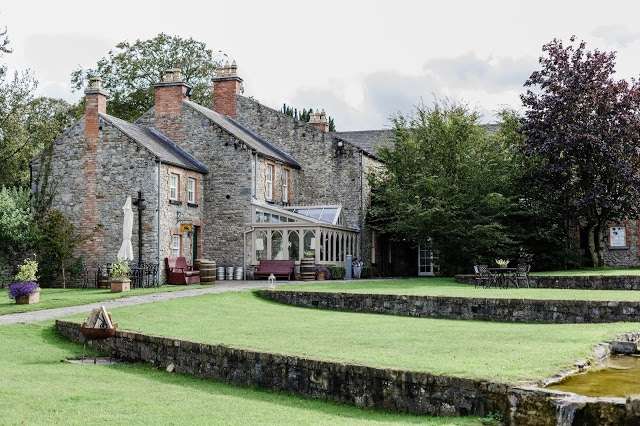 Ballymagarvey Village was recommended to Pat who subsequently viewed it with a friend. “It just blew me away,” says Pat. A year later in 2016 Mainard viewed it. The date was confirmed, the deposit paid and the planning began for their wedding.

We reviewed meticulously the various options for our wedding and because it was a Saturday they were somewhat limited. We decided we didn’t want a Humanist ceremony as we both felt it was not us as we both have a belief in something but not a rigid belief. We opted to go with Spiritual Ceremonies for our wedding celebrant and Pat scoured the internet and the boards for recommendations for a wedding celebrant.

One name continuously popped up so Pat went onto the website and picked who he felt drawn to perform the ceremony. We put in a provisional enquiry two years prior to the wedding and insisting we wanted Miriam Fitzgerald only to be out wedding celebrant. We arranged to meet Miriam and see how we could work together for our wedding. All we can say is in one meeting Miriam truly saw us, our story, our personalities and neither of us had ever had an experience like that before. We knew this was something special. 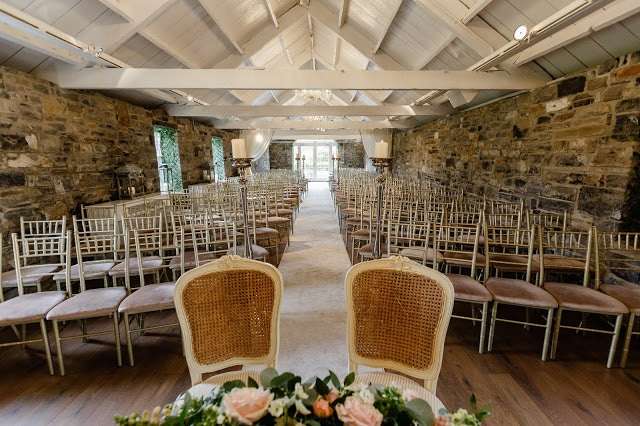 Miriam spent a lot of time getting to know us and we loved the fact we could incorporate our mother’s who had passed away into the ceremony. Having their photos on the table in ceremony was incredibly special to us in addition to the remembrance candles. The intimacy and personalisation throughout the wedding ceremony continued with readings and the handfasting ceremony and Miriam orchestrated everything beautifully. She told our story, putting us on a pedestal. To this day everyone has said that they have never been to a wedding like it, it was fun, relaxing and everyone was spellbound.

The Details of the wedding ceremony.

Our wedding celebrant Miriam helped us create a ceremony that reflected us as a couple. We chose five best women as opposed to best men and settled on five of our very dearest friends to support us on the day” says Mainard, we also decided to choose our sisters to walk us up the aisle. As both our mum’s had passed away. I wanted Blue or Silver for the girls and Pat wanted Red or dark Purple for his ladies which we purchased from Wed2be in Drumcondra. They are so incredibly helpful to deal with. Choosing the right wedding celebrant was very important for us. 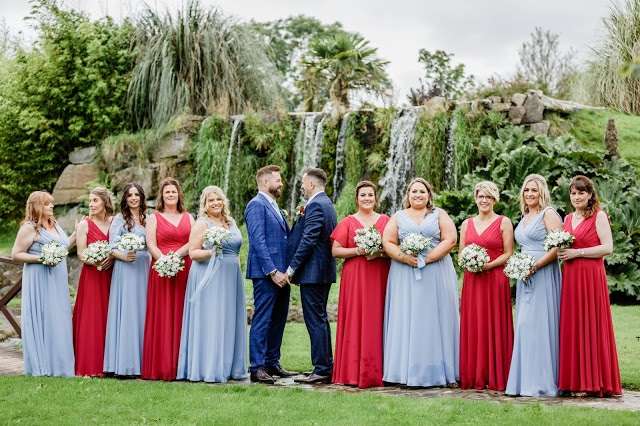 We initially considered buying our suits off the peg but nothing looked worked so we made the decision to spend a bit more on our suits and see what the difference would be. Well what a difference!  Pat had an idea of what he wanted and Louis Copeland delivered it. Each suit fitted so comfortably we knew instantly it was the right decision. Never had either of us stepped into something that felt so right, the suits really were worth every penny. 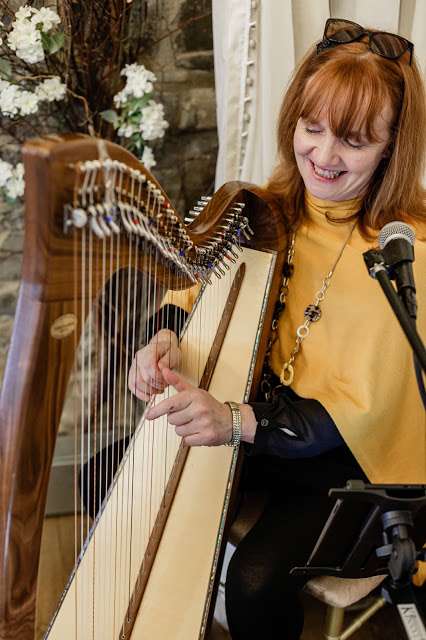 Brenda Grealis Wedding Singer gave us a link to her website where we listened to some of her recordings. We were completely blown away.  She is so accommodating, her professionalism and warmth really shone through and as for her talent, well it just left everyone breathless. Brenda helped us to choose songs and music with special meaning to us and then brought them to life. Both within the ceremony and the drinks reception Brenda entertained us effortlessly. She is truly incredible. 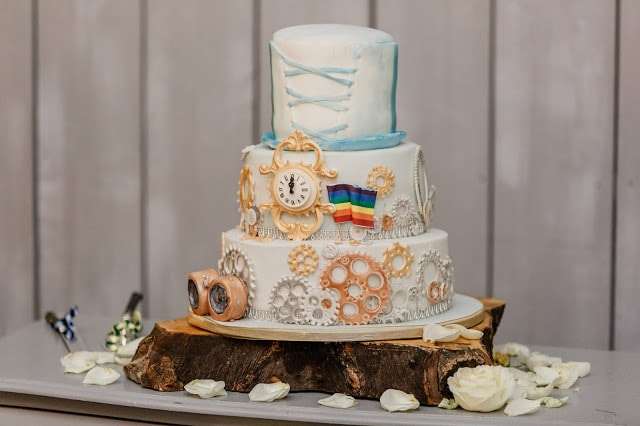 Our cake was another incredible surprise. Pat researched confectioners in county Meath near Ballymagarvey Village and found the incredible lady that is Bernie Kennelly. Bernie went above and beyond what we had imagined in creating our very own steam punk style cake. Not only was it an incredible cake to look at, it tasted fabulous too and went so quickly on the night. Bernie also delivered and set up the cake on the day and is just an all round lovely woman. 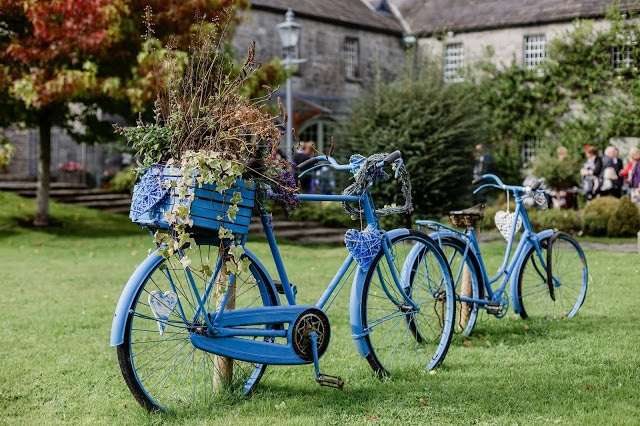 The Bentley Boys were just incredible and the singer Roisin brought everyone together. She got everyone onto the floor dancing and participating. Our DJ Dylan Walsh continued that trend. He kept the floor filled for everyone until bedtime. 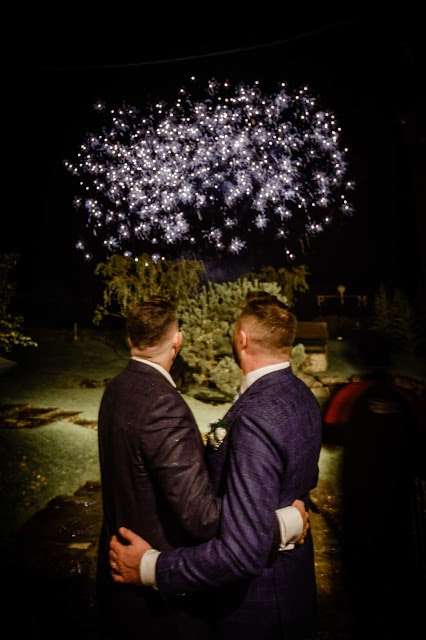 “I love Fireworks” says Mainard and really wanted to have them that night to mark our celebration.  I was thrilled with the awe inspiring display by RocketPyrotechnics despite the weather. Our initials lit up the skyline in massive sparkles, it was absolutely breathtaking and I would highly recommend them if you wanted that something extra special. 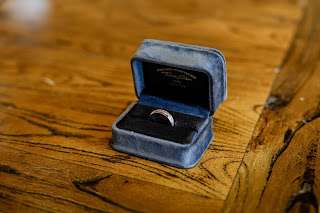 We purchased our rings from Appleby Studios on Grafton Street, I wanted a celtic knot design” says Mainard, and Appleby studios suggested a perfect option for my skin colour, an option I hadn’t considered. We are absolutely thrilled with them. 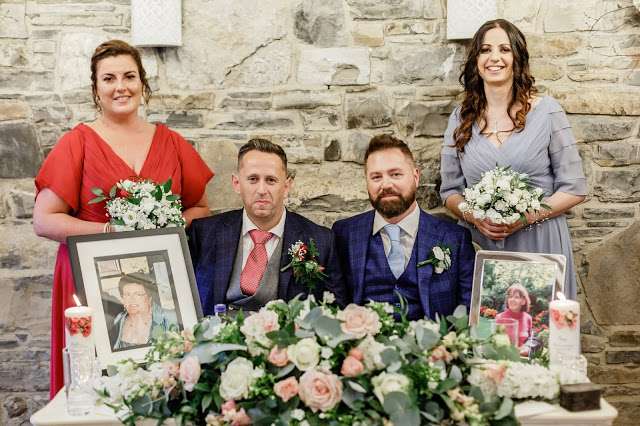 Angela Darragh in Drumcondra created the stunning floral arrangements. She looked after the buttonholes along with all of the ceremony room arrangements too! Her talent is amazing and her work speaks for itself. 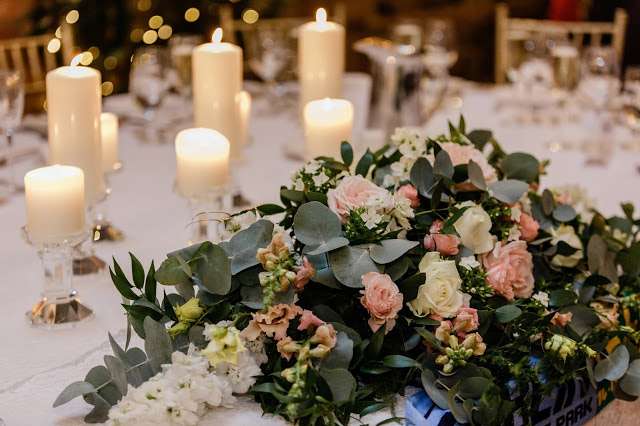 Brian Guilfoyle from Two Paws Video ensured everything was easy for us as we were both incredibly nervous. Brian is so relaxed, which is exactly what we wanted. His easy going nature and great sense of humour generated a sense of  calm which enabled him to captured everyone effortlessly and he wasn’t ridiculously expensive like some of the quotes we got. 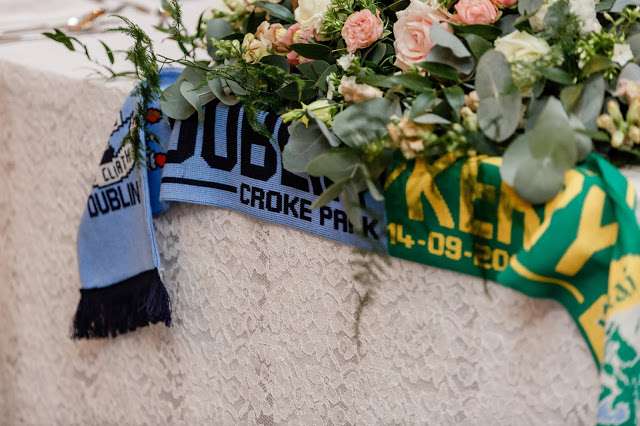 Mark Doyle was an essential asset to the day. Not only is he great fun to work with but also an absolute gentleman and all round nice guy.  Everything about him is relaxed and fun. He captured some incredibly special moments throughout the day along with more specific photos we asked him for. Nothing was too much trouble. 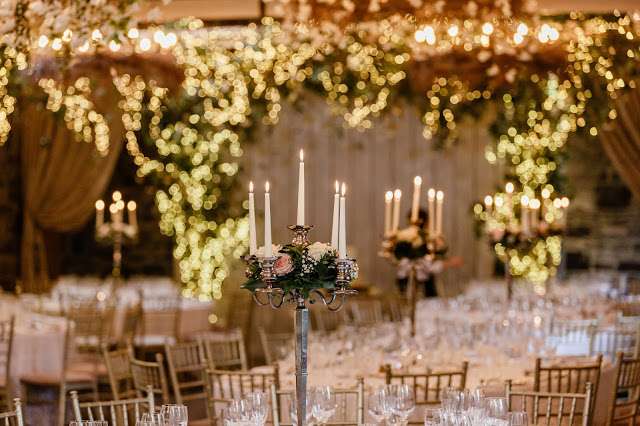 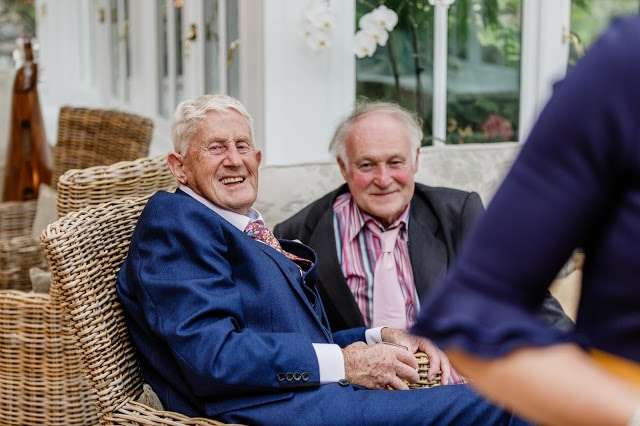 Ballymagarvey is such a stunning location, we just loved the privacy of having the venue to ourselves. It was extremely romantic. With such a variety of locations to sit, places we could chat with our families and friends made it all so relaxing and the wedding team there are incredible to liaise with.

The food was absolutely mouthwatering and everyone was so kind and generous. They just made that extra effort to create the sense of magic we had hoped for.

With so many highlights of the day, if we had to pick one it would be, being announced as husband and husband by our wedding celebrant Miriam, in that moment time stood still for us. Although there were many times within the ceremony that it felt as if it was just us and Miriam, but being surrounded by our family and friends and for them to be a part of our celebration was priceless, I just wish we could do it all again! We would say to anyone looking for a wedding celebrant to contact Miriam